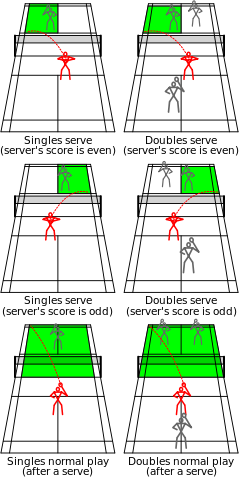 Interval and Change of Ends
Singles
If players commit an error in the service court, the error is corrected when the mistake is discovered.
In a doubles match between A & B against C & D.  A & B won the toss and decided to serve. A to serve to C. A shall be the initial server while C shall be the initial receiver.

YouTube has many badminton tutorial videos.  Below is a link to a particular channel that has a group of badminton coaching videos.
Complete Badminton Training by BadmintonConnect.com/

COME ON OUT AND JOIN US!

Footwear:
Clean, non-marking athletic shoes are required. (Please do not wear street shoes on the gym floor. Do not track dirt or snow into the gym!)
Racquet:
Bring your own or borrow a club racquet.
Birds:
Yellow nylon provided.
Safety Glasses:
Mandatory for under 19. Optional for adults but highly recommended.
Note: Loaner glasses are available (limited supply) until Juniors/Youth buy own.
Contact:
Phone:
Terry @ 613-473-5662
Email:
centrehastingsclub@gmail.com